The K1 genetic variant that has been part of EquiSeq’s Myopathy Panel since October 2019 is a missense allele of COL6A3, a gene encoding a collagen [1]. Collagens are a family of proteins that are the main structural components of the connective tissue. Collagens also guide bone formation and play an important role in many other tissues. They are the most abundant proteins in the body of mammals.

The COL6A3 gene encodes one of the type VI collagens that are components of the endomysium, a layer of connective tissue that covers individual muscle fibers. Mutations in human COL6A1, COL6A2, and COL6A3 are associated with Bethlem myopathy and Ullrich congenital muscular dystrophy [1-11].

Figure 1 shows the primary structure of the COL6A3 protein.

The collagen triple helix is a secondary structure of different types of collagen. It consists of three different collagen molecules wrapped around each other in a helical fashion as shown in Figure 2. 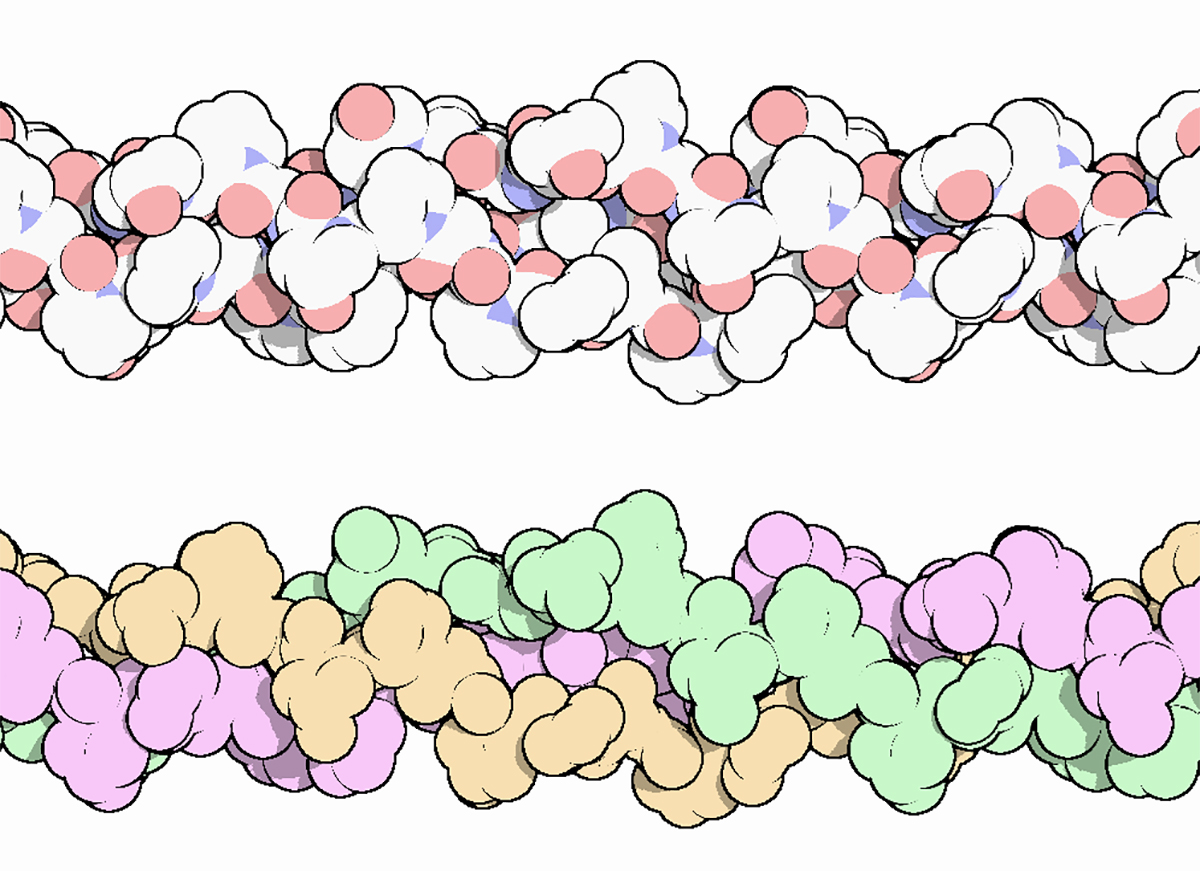 Figure 2. The collagen triple helix, colored by atom, with oxygen in red and nitrogen in blue (top), and colored to highlight the three chains (bottom). Three different protein molecules are wrapped around each other in a helical fashion.

The portion of the collagen molecule that participates in triple helix formation is made up of a repetitious sequence of amino acids with the general sequence Gly-X-Y. Every third residue is a glycine. This is critical to the structure, because glycine, with an R group consisting of a single hydrogen, is the only amino acid that can have contact with the center of the triple helix due to spatial constraints. The collagen triple helix is also rich in proline and hydroxyproline residues at the X and Y positions. The large number of proline and hydroxyproline residues prevent the formation of regular alpha helix and beta sheets, which are common secondary structures found in other proteins.

Human patients with defects in COL6A1, COL6A2, or COL6A3 associated with Bethlem or Ullrich myopathy have an array of symptoms including muscle weakness, muscle contractures, muscle atrophy, hyperextensibility in distal joints, rigid spine, abnormal scar tissue, and difficulties in ambulation [7, 11]. Patients who die of the disease often die as a result of respiratory insufficiency resulting from weakness in the diaphragm, which is skeletal muscle.

bPathogenicity is given for missense alleles judged to be pathogenic or likely pathogenic in the two databases listed based on clinical evidence.

cAll missense alleles identified as pathogenic or likely pathogenic between positions 2038 and 2373 of human COL6A3 protein (NP_004360.2), as shown in Figure 1, are listed. Most of these alleles affect segments of triple helix, but three alleles fall into an interdomain region.

Figure 3 shows the alignment of the triple helical region of the equine and human COL6A3 protein sequences and the position and amino acid substitutions observed in pathogenic human COL6A3 alleles and in the K1 allele of equine COL6A3. 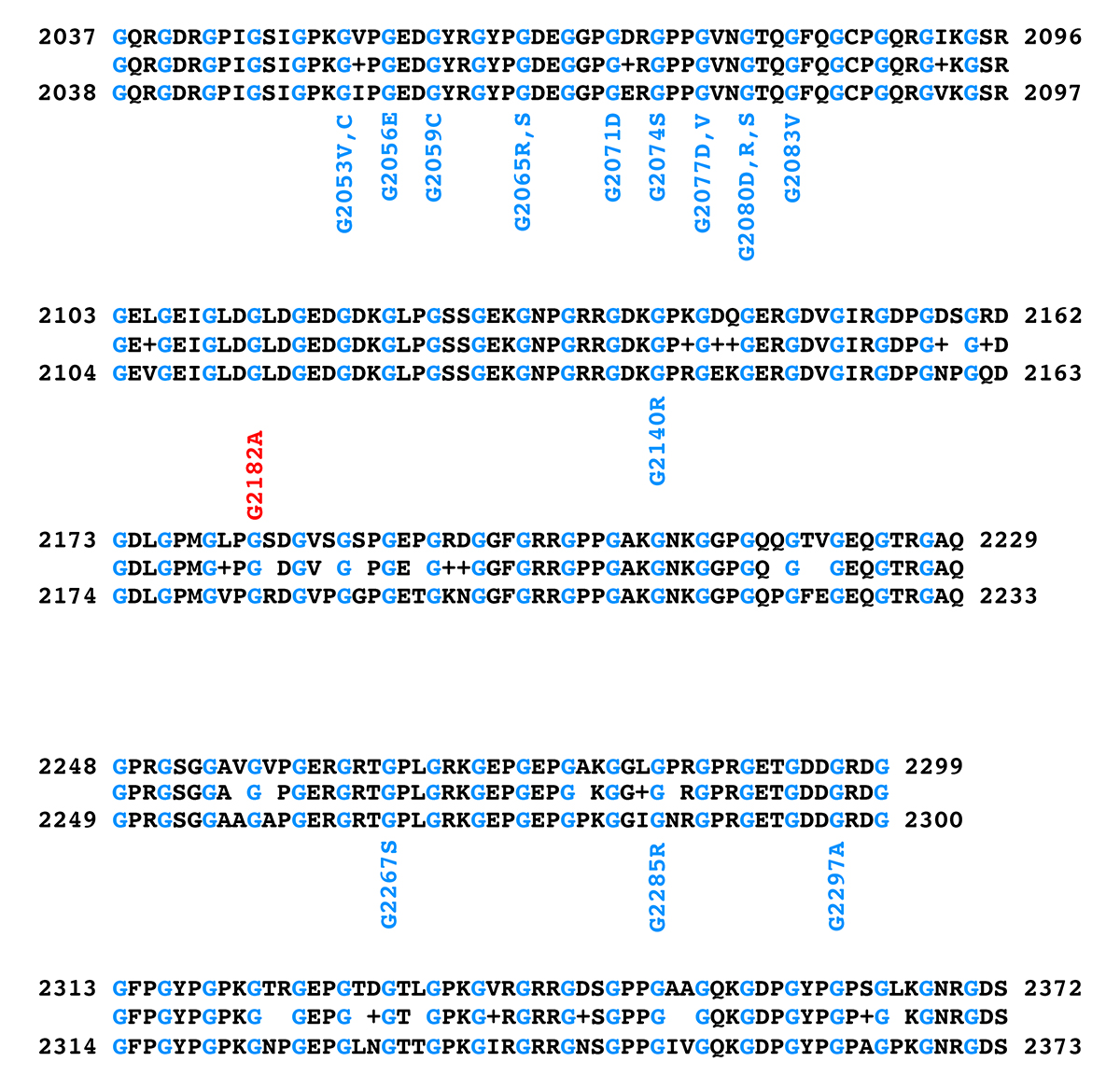 The work on human alleles of COL6A3 suggests that the K1 allele of equine COL6A3 should have a moderate semidominant effect and a more severe defect in homozygotes. There is no effective treatment for human patients with Bethlem myopathy or Ullrich congenital muscular dystrophy.

Effects of the K1 allele of COL6A3 in horses

The K1 allele of COL6A3 was originally identified by whole genome sequencing of a Paint Horse with symptoms of exercise intolerance and a diagnosis of Polysaccharide Storage Myopathy type 2 by muscle biopsy at four years of age. Symptoms first appeared at one year of age. This horse is heterozygous for K1 (n/K1). The horse is homozygous for the wild-type alleles of all five genetic variants in the Quarter Horse “five panel,” and also for the wild-type alleles of other genes included in EquiSeq’s Myopathy Panel, as shown in Table 2.

Table 2. Genotype of the Paint Horse in which the K1 allele of COL6A3 was identified.

aAlleles are described using the gene symbol and the amino acid substitution based on the commonly accepted protein model. All are missense alleles except for GBE-T34X, which is a premature termination allele.

This n/K1 horse exhibits fasciculations of the triceps musculature in the front limbs after moderate exercise. After moderate exercise the horse becomes resistant to moving forward and exhibits a gait abnormality termed "rope walking," where the striding leg is twisted around in front of the supporting leg, as if the horse is walking a tightrope. The horse does not show this gait abnormality when rested.

A second muscle biopsy was performed at eight years of age. Frozen sections were immunostained with antibodies to human COL6A3 and the basement membrane protein perlecan. There was no sign of endomysial fibrosis, a finding similar to that seen in human patients with moderate Bethlem myopathy [8, 9, 14, 15]. Scar tissue is normal with no evidence of keloid formation, and there is no overt sign of hyperextension or contractures of the distal limbs.

The unselected samples described above were from archived DNA from a breed survey. No homozygous horses (K1/K1) have been directly observed by researchers at EquiSeq.

Samples received at EquiSeq that cannot be considered to be unselected show that the K1 allele of COL6A3 is rare among stock breeds (present in only two n/K1 horses in 242 Quarter Horses, Paints, and Appaloosas despite having been discovered in a Paint horse) and absent in a sample of 144 Thoroughbreds. It is present in Arabians (allele frequency 24/488), Haflingers (5/40), Standardbreds (2/44), and Miniatures (2/18). We are in the process of surveying additional horses, especially Haflingers and Standardbreds, in order to attempt to find a homozygote (K1/K1).