Genetic Linkage of P8 and K1

How can you figure out the chances of different genotypes when breeding horses?

It's easy for one gene. Let's say that there is a stallion that has one copy of one of the genetic variants associated with PSSM2, the P2 variant (MYOT-S232P). This stallion is heterozygous (n/P2), meaning that he has one normal copy of the MYOT gene and one copy with the P2 mutation.

If the stallion is bred to a mare that is clear (n/n) for the P2 allele, the Punnett square below shows the odds. 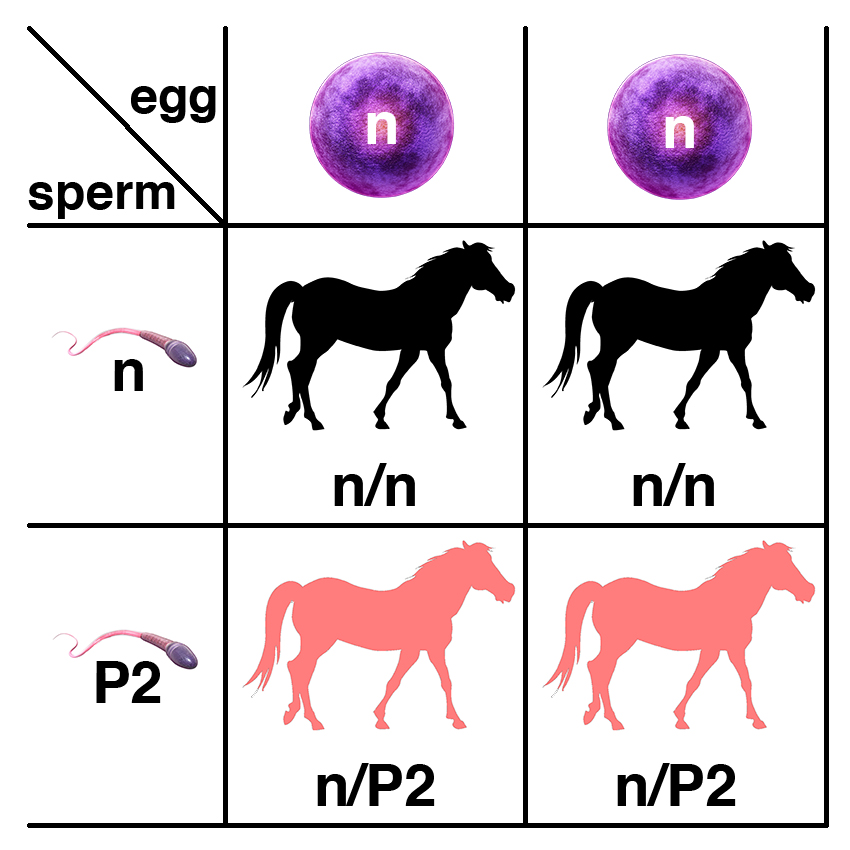 Gametes (sperm and eggs) contain a single copy of each gene in the horse. The stallion produces two kinds of sperm in equal frequency: sperm with P2, and sperm with the normal allele (n). The mare produces eggs with one of the two normal alleles (n).

Because each of the four gamete types that the stallion produces are equally likely, the chance for each of the foal genotypes is 25%.

Not all gene pairs show independent assortment. If two genes are close to each other on the same chromosome, the parental types will be more frequent than the nonparental types. What does this mean?

The extent of the departure from independent assortment can be measured experimentally, but this has not been done directly for P8 and K1. It can be estimated from published linkage maps for horse [2].

The rate of recombination per base pair varies across the horse genome and differs for any given region among horse breeds [2]. It is possible to estimate the distance between P8 (PYROXD1-D492H) and K1 (COL6A3-G2178A) using the supplemental data in the cited study [2]. For Arabians, the distance is 23.6 cM; for Standardbreds, it is 19.9 cM. For purposes of this blog post, we will use an estimate of 21.8 cM. These breeds were chosen because both P8 and K1 have been found in both breeds. 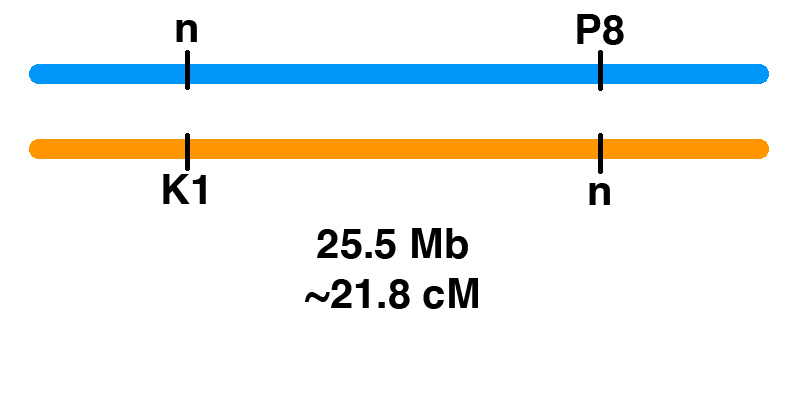 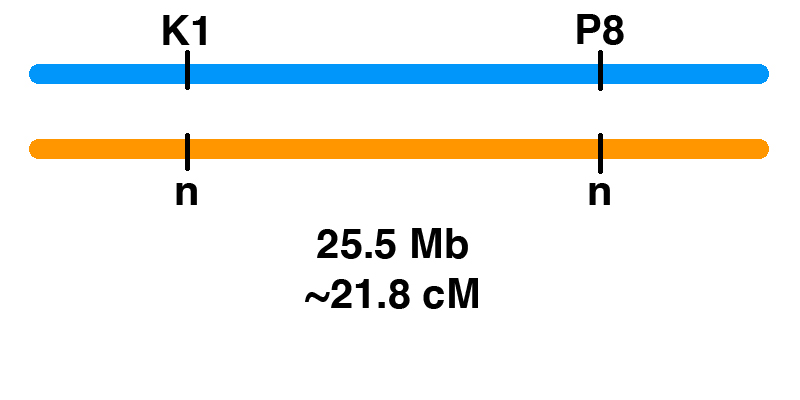 These two different types of n/P8 n/K1 will produce the four gamete types at different frequencies. Parental types (the chromosomes inherited from the parents) will be more frequent than nonparental types resulting from meiotic recombination.

If a horse that is n/P8 n/K1 has one parent that is n/n n/n, it must have inherited both P8 and K1 from the other parent, as in the second case above.

What This Means for Horse Breeding

In this case, if the n/P8 n/K1 horse is highly desirable for breeding, because it represents a line that might be lost or has superior performance, it is best to breed this horse to one that is n/n n/n. From the Punnett square for the first case above, this breeding is likely to produce n/P8 n/n or n/n n/K1. The likelihood of a foal that is n/P8 n/K1 is 10.9%.

Horses that test as P8/P8 n/K1 or n/P8 K1/K1 definitely have one chromosome that has both the P8 and K1 alleles. We have not seen either genotype in the limited number of horses that we have tested. We have never seen a horse that was P8/P8 K1/K1.