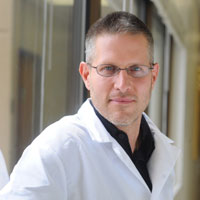 Jeremy has worked at the interface of biology, bioinformatics, and engineering since the beginning of his scientific career. He obtained a B.S. in Mechanical Engineering from the University of Texas, Arlington and a PhD in Bioengineering at UCSD before undertaking postdoctoral research at Harvard Medical School. He moved to the University of New Mexico in 2005, where he works with an interdisciplinary group in genomics and DNA sequencing technology.

Jeremy is one of the inventors on several patents behind EquiSeq's technology, as well as serving on EquiSeq's Scientific Advisory Board. Jeremy's vision provides direction for EquiSeq, which is the reason that he selected "Chief Visionary Officer" as his job title.

Favorite Quote: "The people who are crazy enough to think they can change the world are the ones who do." — Steve Jobs

You'd be surprised to learn that ... Jeremy has never taken any of the courses he has taught.