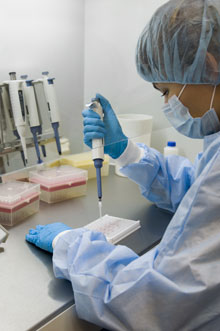 Researchers at EquiSeq have developed tests for genetic variants that predispose a horse to Polysaccharide Storage Myopathy type 2 (PSSM2) or Myofibrillar Myopathy (MFM), a subtype of PSSM2. These tests identify horses at risk for developing PSSM2/MFM before they show any symptoms.

How is this different from a diagnosis by muscle biopsy?

Can these genetic tests identify every horse with a predisposition to PSSM2/MFM?

No. There are horses with a diagnosis of PSSM2/MFM that do not carry copies of the variants (P2, P3, P4, P8, or K1) identified in these tests. Researchers at EquiSeq are searching for other variants (in different genes) that predispose to PSSM2/MFM.

Will every horse with this variant develop PSSM2/MFM?

No. The variants identified in these tests have incomplete penetrance. This means that some horses with one copy of the variants (n/P2, n/P3, n/P4, n/P8, or n/K1) will not show any symptoms, even when well past the usual age of onset. Horses with two copies of the variants (P2/P2, P3/P3, P4/P4, P8/P8, or K1/K1) appear to be more strongly affected.

What are the affected genes?